My experience at the Briscoe hinged on place, on sensing how the tile and stone beneath my feet ties me to to those whose feet stood on it before. Perhaps it is fitting, then, that the Briscoe’s “remoteness” makes it a destination; yes, you must map out your research journey, but you must also map your journey to the building itself. The physical quest underlines that you have come to a place where you will engage in research. A place that will tie you to to the past. A place that is open from 10–5 on weekdays, 9–1 on Saturdays, and closed on Sundays.

Preparing for the Trek

As all visitors must, I prepared for my visit by registering online with the Center. As all visitors should, I also perused its collections on its website. I did not have much of a research agenda, if any. So, I went more-or-less page-by-page-through the Collection Strengths, searching for a collection that piqued my interest.

Collection Strengths Landing Page: I navigated the Briscoe’s collections by visiting the pages of each “strength” listed in the lefthand column.

In my mind’s eye, I knew I was interested in something that was a snapshot of ordinary life, rather than something of monumental proportions. Rather than looking at a “gem” of the collection, I (perhaps arrogantly) wanted to find something small but powerful, everyday but illustrative. Without knowing it, I was approaching the archive from a not completely un-Foucauldean position, looking for a revelation from the leftovers of institutions.

I found my site of inquiry deep within the Briscoe’s Music collections tab: the“UT Folklore Center Archives, ca 1928–1981“. It chose it as much because of “lingering on the different” (Farge 65) as because of any imagined germ of possibility. I dove into it because it wasn’t clear what it offered. It was listed under Music, but its description allowed for a lot:

Manuscripts, publications, and sound recordings of Texas, American, and international folklore and music, including over 2000 reels of tape. Of special importance are the field recordings of folklorists John A. Lomax, William A. Owens, Américo Paredes, John Henry Faulk, and Roger Abrahams.

Staying true to my approach, inside the finding aid, I was intrigued not by the recordings “of special importance,” but by the long list of student projects: “arranged by name and/or genre, [relating to] to folklore topics such as legends, stories, jokes, various types of songs, customs, material culture, speech, puns, and riddles.” It was exactly what I thought I wanted—pages on pages on pages of the tiniest slices of human experience. I selected several boxes from the genre collections (1962–1976) and put in my request.

UT Folklore Center Finding Aid: The box profiled above is where I found my item of interest.

Fast forward several days. Once I’d passed through the Briscoe’s doors into its icy-cold AC, I was politely directed to the reading room, housed deeper in the building, past two additional checkpoints. After my identity was confirmed and my belongings stowed, my materials request was activated, pulled up from its digital waiting room and put in the hands of an archives employee, who promptly went to work finding my documents.

While waiting for my boxes, I surveilled the room from my desk. It was new; I recalled Margaret’s mention of its “new car smell.” She was right. Despite its pristine condition, the mood here is lighter than that of the HRC. There is less of a feeling of sanctity. Friendly students staff the desks and pull materials. Floor to ceiling windows offer natural light and impressive views of campus. While at the HRC, tables seem designed to recall the grand libraries of yore, here, tables were designed for comfort and usability. 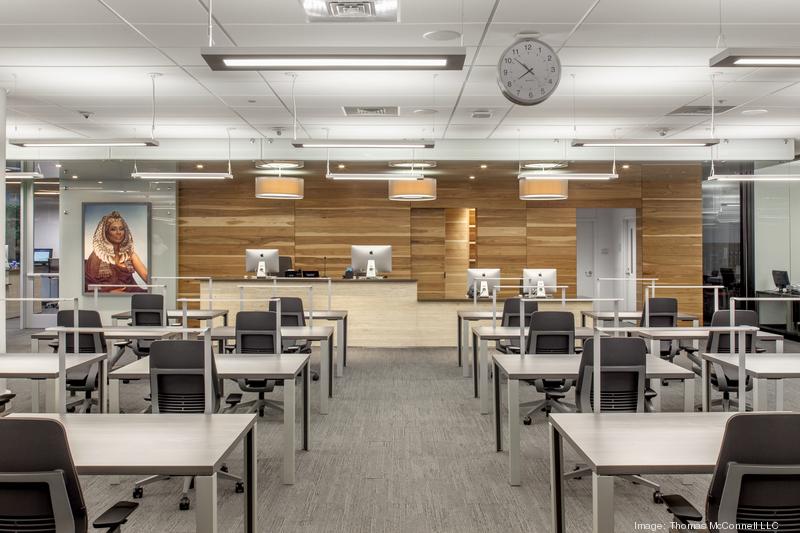 Briscoe Reading Room: This photo, taken by Thomas McConnell, illustrates the state of the art, yet comfortable, furnishings I experienced.

After 10 minutes or so, my boxes arrived on a rolling cart. It was a door-to-door service—I was even allowed (gasp) to keep one box at a time on my desk! ) 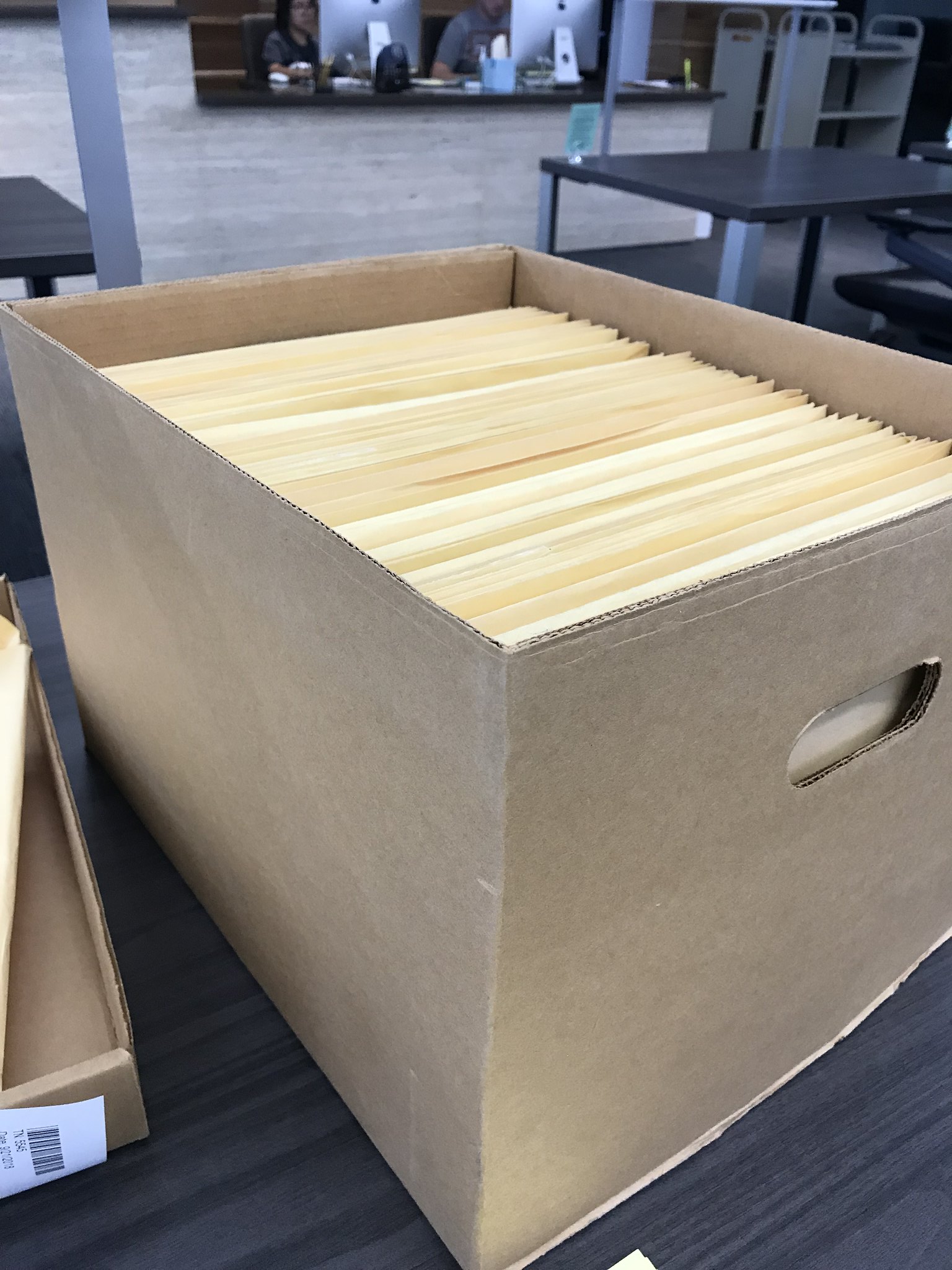 Quickly, it sank in how much there was to sift through—particularly since I didn’t have anything specific for which I was searching. Each box (I’d requested 8 and was allowed to look at 3 at a time) had around 40 files, each of which had around 100 pages. That’s a lot of pages.

It hit me: I might be here a while. And I might still not find anything stellar.

I started with Folk Medicine, the first file of the box whose description you saw above: 2.325/J108. What I found were neatly typewritten and meticulously documented reports of common people’s accounts of folk cures, compiled by several students over at least two years (1967–1968). I was struck by how haphazardly subjects seem to be have selected (the student’s mother, the student’s friend) and how that contrasted with how carefully their stories had been recorded (detailed filing system, almost clinical notes, complicated record formatting).

I chuckled at a few purported cures and was chuffed to see one from a student at Davidson College—my North Carolina alma mater, and at the time, a school with 1004 all-male students (Stoutjesdyk). However, although these stories amused, the huge and seemingly random cross-section they surveyed made it hard to locate their takeaway. Without more, I couldn’t put together a story that I wanted to tell. The most I could determine, at least from this admittedly cursory perusal, was that no one—rich or poor, white or black, young or old, Texas native or non-Texas native—really knows how to cure the hiccups. I had found the “incompleteness” mentioned by Farge, but I wasn’t confident I could tackle its “combing” in this setting (55). 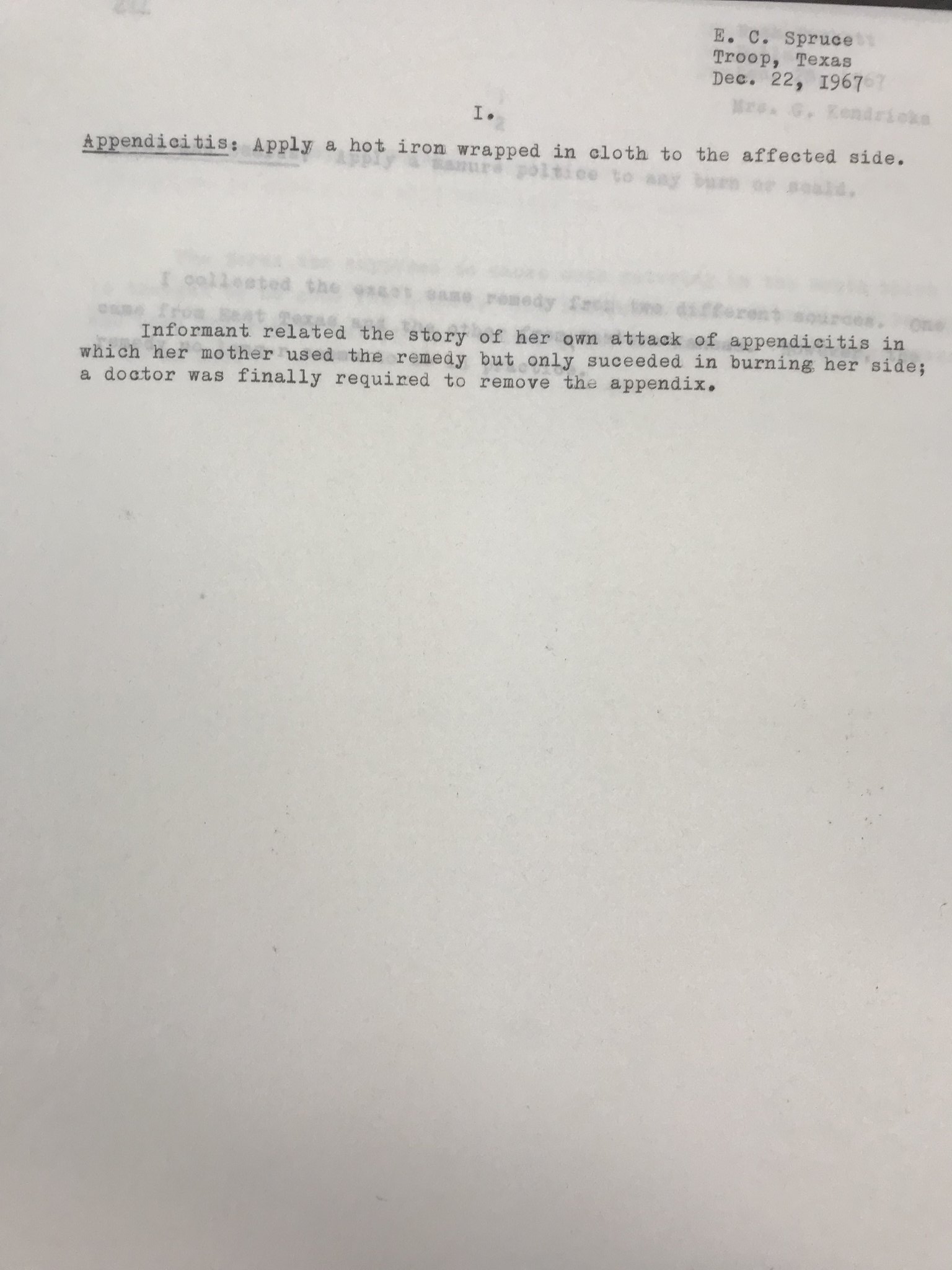 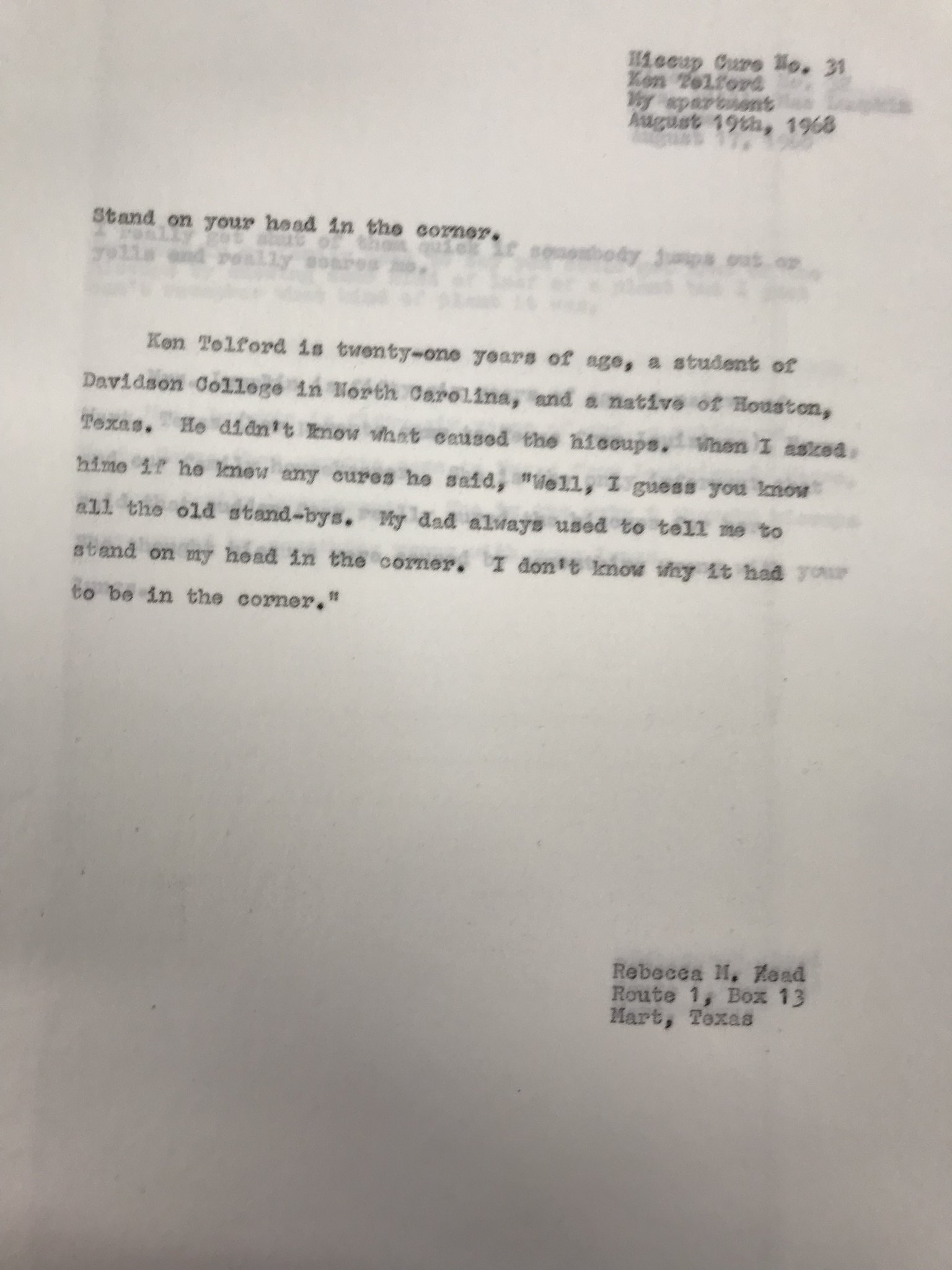 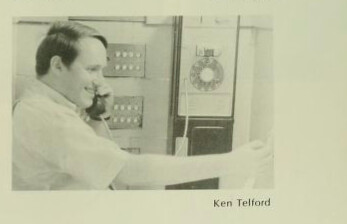 Slightly disappointed by Folk Medicine, I decided to try a different genre, and chose Graffiti. Immediately, I hit pay dirt. The first report filed was “Desk-Top Graffiti.” Unlike the Folk Medicine accounts, authored by different students and grafted together as one, “Desk-Top Graffiti” was a self-contained, single author study of desktop graffiti at UT by Larry Fielder from “Janruray” 1968. The report was written for the course Anthropology 325K. 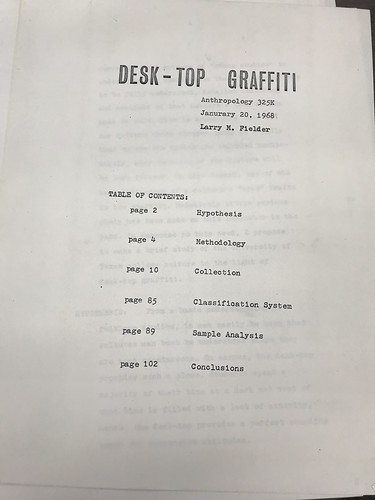 Cover page and table of contents of “Desk-Top Graffiti”

Larry’s report is great. It gives a quick overview of the contemporaneously nascent “folklore studies,” before hypothesizing that, because desks are where students spend an inordinate amount of “inactive” time, they are an ideal site to explore student’s “spontaneous” reactions to UT college culture, as well as American culture at large (Fielder 2). He then outlines his research methodology, which includes an incredibly detailed recording system, which can be seen below. All in all, Larry examined 75 desk tops. 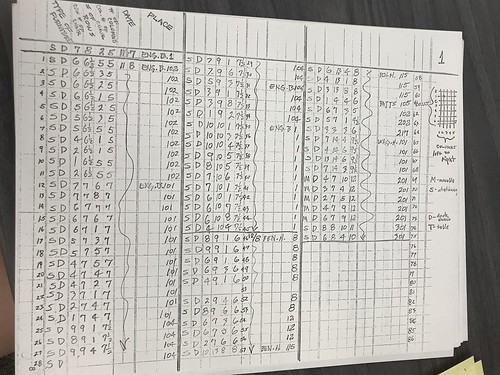 Although Larry’s chart clearly records the classroom “English Building 102,” I didn’t realize its significance until I turned to the first desk-top entry. English Building…102…could that be? Parlin 102? Our classroom? 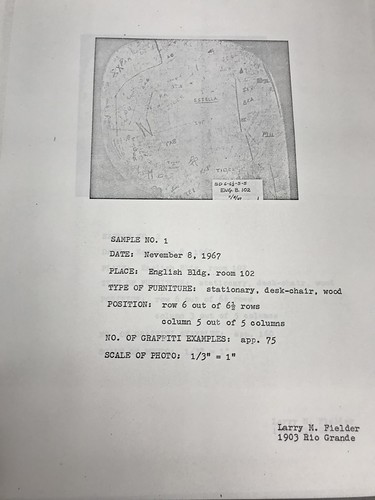 The PCL’s university map collection gave me my answer: Yes! Before the construction of Calhoun in 1968 (Partheymuller 34), Parlin was known simply as the “English Building,” as can be seen in the 1961 campus map below.

This was it! The resonant item for which I had hoped! What are the chances, that of all the files in all the archives, I had selected one that recorded the graffiti that graced the desks in our classroom 49 years ago? All the PAR 102 examples can be found here. PAR 104 was also surveyed, and those images can be found here.

Larry’s report, in a sense, is a record of a record, an archive of an archive. These desks “captured speech,” or perhaps more correctly, captured unspoken thoughts (or curses). I felt the ghosts of students come before. If Larry’s hypothesis is correct, and I believe it by-and-large is, these “utterances” expressed how culture was affecting the conscious (and subconscious) of UT students in 1967.

From almost 50 years later, these expressions are at once familiar and fascinating. Many themes persist in the collective consciousness today: Greek life and its hold on identity, sports pride, boredom with lectures. Others are more indicative of the zeitgeist, which may explain why Larry doesn’t mention them in his brief conclusion. The pattern of these expressions about may not have been clear to a contemporaneous observer, but in 2018, one is struck by the desk-top graffiti’s chronicling of anti-war/pro-war conflict, civil rights struggles, hippie culture, drug experimentation, sexual experimentation, psychedelic rock, and the like. I’ve catalogued some of these themes and examples of their expressions in the chart below.

It’s worth briefly noting that the images in this report are fading. There was no indication that Larry’s prints or negatives were stored alongside the document, which means the only remaining images are the photographs reproduced on typewriter paper. Already, many shallower etchings are no longer visible. This forces the question: Is Larry’s report worth saving? In 20 years, will all photographic traces of 1968’s desks be gone?

Three area of inquiry still intrigue me about Larry’s report.

1. Why was the school so tolerant of desk graffiti?
Larry mentions “the relatively lax punishment of graffiti writers” (102). The marred desks of 1968 stand in stark contrast with present-day conditions. It’s hard to imagine that current facilities services staff (or for that matter, instructors) would tolerate vandalism, particularly that of a crude nature.

Why did the institution allow this transgression allowed to occur? Larry remarks that there has been “a progressively more real sense to the graffiti…reflect[ing] the true cross-section of attitudes” (102). Perhaps it was this seeping of current events that led to the prohibition we feel today. Could we speculate that, although fraternity letters and football encomiums fit within the realm of accepted expression, the school was uncomfortable with new graffiti that expressed more serious and transgressive topics? Disciplinary and maintenance records may help elucidate how and why the permissive attitude toward graffiti changed.

2. Does this graffiti reflect all students’ thoughts or predominantly (white) male thoughts?

Enrollment demographics aside, the prevalence of fraternity identifications, football references, and mentions of the female form suggest that most graffiti writers were male. Because many fraternities were—and still are—majority white (as well as nostalgic for the antebellum South), we may also assume that a large number of graffiti writers were white.

When we recognize this, we realize the limits of desk-top graffiti as reflection of the collective conscious. Further research about UT’s enrollment history, its fraternities’ demographics, and the demographics of classes taught in the English building at this time could help us pinpoint whose opinions this graffiti best expresses.

3. What is the history of the UT Folklore Center?

My focus has so far been on the archival item, rather than the archive or its corresponding institution. However, there is a fascinating history behind the UT Folklore Center itself.

From a brief JSTOR search, I was able to determine that the UT graduate Folklore major was launched by Américo Paredes, a UT English and Anthropology professor best known as the founder of Chicano Studies. Paredes, whose work is housed in the UT Folklore Center Archives, also became the first director of the Center for Intercultural Studies in Folklore and Oral History, which has since been renamed the Américo Paredes Center for Cultural Studies.

A better understanding of the UT Folklore Center’s history, and the history of its founder, could help the researcher locate further valuable archival items inside the collection.

It was almost spooky to leaf through the fading images of desks that once filled our space. I was profoundly moved by the simple knowledge that these desks once stood in rooms I regularly inhabit. I don’t think I would have felt the same connection had I discovered these desks were in Garrison, or Waggener, or even in Calhoun. I can’t quite explain why I was so affected; I can only point to the power of place, to the frisson felt when you realize you’re sitting in someone else’s seat.